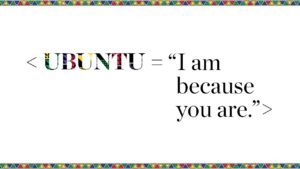 Howard Schultz, Chairman and CEO of Starbucks was meeting and talking to employees who would soon open the first Starbucks stores in South Africa.

Mostly young people, they were telling their stories of growing up in a country that had gone through and was coming out of intense racial turmoil.

The young people kept repeating the ancient African word “ubuntu”.  After several had used the same word in describing their experiences, Schultz asked them the meaning of the word.

One young man smiled, looked at the group and then back at Schultz and said, “I am because you are.”

That word returned to my mind over and over again.

No person is truly an island unto themselves.

It goes back to the beginning of time itself.

We are dependent upon each other.

We find solace in faith and the deity which is the center of our faith.  We are who we are because of our faith in one greater than ourselves.

As independent as we wish to pretend that we are, our independence is foundationally built upon our dependence on others.

We reach higher and accomplish more standing on the shoulders of those who have come before us.

We succeed when we walk side by side with others through life.

When we look into a mirror, though our eyes would reflect a single image, when we truly look closer we see not one, but many…many that has helped us become who we now are.

I am because you are.