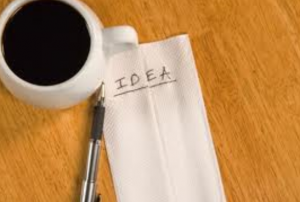 The magic of a half baked idea.

A great movie that began on a cocktail napkin?

The initial thoughts for this economic theory came also in the form of a cocktail napkin with Donald Rumsfeld and a scholastic friend.

Who hasn’t grabbed the first thing they could find and jotted down an idea?

That in fact, is how I came up with this topic.

Grabbed a piece of paper and jotted down the title.

So, you have an idea and you scribbled it out on a napkin at the restaurant.

It may very well be.

You think it is reasonable and has great potential, but no one else at the table sees what you see.

At least not from the napkin.

Ted Turner, cable media pioneer, was famous for coming up with outlandish ideas that were so far fetched few of them were ever realized.

However, Terry McQuirk, long time right hand executive to Ted Turner said this, “Nine out of ten of Ted’s ideas would be beyond crazy.  But that tenth idea always made him who he is.”

Bake the rest of that creative casserole you have in your brain.

You may be on top of the next great thing!

Which starts with an idea.