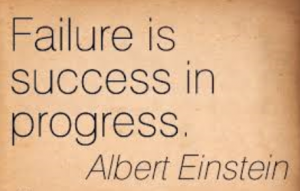 In each circumstance, we what?

Failure is not bad, nor is it detrimental to personal or professional growth, nor is it permanent.

In fact, failure enhances growth…if we let it.

We each fail hopefully and often.

It means we are trying.

Me: Our continual failure is life’s continual progress.

He: Then life is making a LOT of progress with me then.

“A man who refuses to admit his mistakes can never be successful.  But if he confesses and forsakes them, he get’s another chance.”      The words of Lemuel