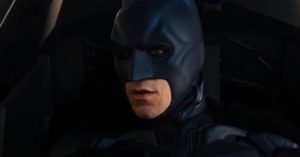 “A hero can be anyone.”…and the quote continues.

“A hero can be anyone. Even a man who did something as simple and reassuring as putting a coat around a young boy’s shoulders, to let him know the world hadn’t ended.”

Bruce Wayne as Batman to Commissioner Jim Gordon in the movie The Dark Knight Arises.

We often look for heroes to be wearing capes or uniforms.

And sometimes they do.

Yet heroes are all around us…everywhere.

Just a reminder that heroes are defined often times by the simplest of gestures…every single day.

Even putting a coat around a young boy’s shoulders.