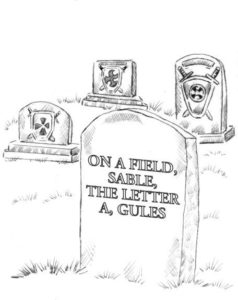 “On a field, sable, the letter A, gules”  The Tombstone of Hester Prynne

Like many, I have long been fascinated by the story of The Scarlet Letter.

The act, the judgment of the act, the penalty of the judgement and the redemption from that judgement.

Hester Prynne chose the live out her life with a scarlet A upon her clothing.

Though in the latter years of her life, it was by choice, not by obligation.

And on the tombstone she shared with Timmsdale, were these words…

She was defined by her past.