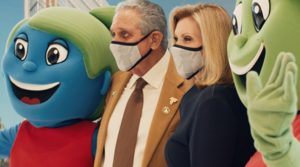 Donna could not have imagined what that decision would lead to in the year 2020.

Her first job in Atlanta was with The Home Depot, still only a few years since being founded by Bernie Marcus, Arthur Blank, Ken Langone and Pat Farrah.

Donna Hyland’s worked in the stores of The Home Depot which began a relationship with Arthur Blank that would last until today, literally today, October 13, 2020, when it was announced that Arthur Blank and his foundation would donate $200 million, as in dollars toward building a new $1.5 billion hospital for Children’s Healthcare of Atlanta.

But wait, I left something out.

Donna Hyland did not remain with The Home Depot.  She went on to become the CEO of Children’s Health Care of Atlanta, 22 years working for this great organization and 10 years as it’s CEO.

It was the steps taken, the paths which crossed, many years prior that led to such a phenomenal gift toward this fantastic cause.

Who have you met, even years ago, that you thought, would be only a casual friendship?

Who might you meet tomorrow that could hold the keys to the very door you have been banging on trying to get in?

Who are the relationships in your life, even without realizing it, that are being built now for the future good of many?

Where life takes you…who can ever tell?

Not one day is wasted nor Hope lost.

Not one memory formed is forgotten.

The future is greater than anything you could think of, ask for, or imagine.