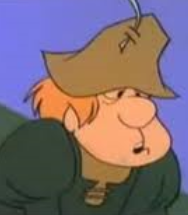 The cartoon series, Gulliver’s Travels was popular when I was a kid.

I can only recall one character from that show.

Glum was the most negative, pessimistic cartoon character I can ever remember.

No matter the situation, Glum would find the negative.

He would find the dark cloud encircled by the silver lining.

He would often say, when met with a challenge, “It’s hopeless.  We’ll never make it.”

You may be a Glum.

Find the good in everything.

I understand it is difficult at times.

But if you really try, you can.

There is some positive that can come from every negative, no matter how unrealistic the positive may be.

Eventually, it will all turn around.

The verse says it, “seems wrong”, and it “seems right.”

It is the perspective of hope that you bring into a given situation that allows you to lead others out of the gloom of hopelessness.