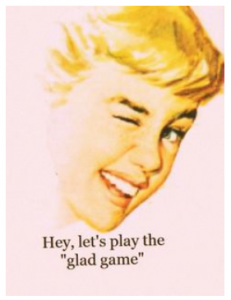 Finding something to be glad about in every situation.

We could each benefit by playing this game each day of our life.

From this book, a children’s classic, came the outlook on life, the Pollyanna principle.

The Pollyanna principle (also called Pollyannaism or positivity bias) is the tendency for people to remember pleasant items more accurately than unpleasant ones.

This principle was developed by Margaret Matlin and David Stang, both researchers.

More like Pollyanna is what I aspire to be.

As a true melancholic, I tend to overthink, dwell too deeply and internalize everything, considering the suffering for the victory and not the victory itself, taking every single word captive rather than being held captive by the person who spoke the words I am held captive by.

Make a conscious effort to enjoy life and the people in my life.

To look for the good in everything.

To be ready to play the glad game as circumstances arise.

One of your tires are flat, but there three that are not.

You are broke, but you have clothes on your back which makes you richer than many.

Just after President John F. Kennedy was assassinated, Robert Kennedy, the brother of the President, was making a public statement, and a little boy in the crowd, recognizing the tragedy, but not knowing how to express his sorrow, said to Robert Kennedy, “Someone killed your brother.”  Robert Kennedy, not wanting to embarrass the young boy, and wanting to comfort him as well said, “It’s okay. I have another one.”

Regardless of the circumstance you find yourself in, as difficult as it may be, something good can come out of every bad situation.

Strive to be the person in the darkest circumstance that can find good in all things.