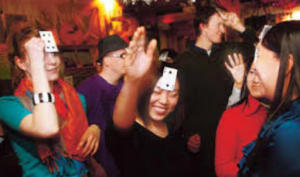 It was a very effective learning tool.

And though it was not implied, nor was it the purpose of the activity, I walked away from it with this thought.

We treat people not at all equally, but we treat them as to how important we perceive them to be.

A room of twenty or so people.

A deck of cards.

All the kings, queens, jokers, etc. were taken out of the deck.

All that was left were numbered cards.

The game was introduced this way.

Each person would select a single card, without looking at it themselves and hold it to their forehead.  No one could see their own card but you could see the card that all others in the group was holding against their head.  The 10 card represented royalty, the king and queen, a prince.  The 2 represented a peasant.  And then you had everything in between.  We were told to interact as though we were at a party and to greet each other and mingle.

Remember, no one can see their own card, (or their value), but you can see the value of the other people.

Then at the moderator’s instruction she said go mingle.

(Let me add this right here.  Granted, I am not the brightest bulb in the house, and though I was trying to be friendly, I could not really mingle with a lot of the other pretend guests, because so many people were coming up to me and talking, being so kind.)

Then after a few moments of this, we were asked, again without looking at our cards, to go stand to one side or the other of the room as to where you perceived your value to be.

One of the ladies, who had played this game before, felt pity for me, as I was standing in the middle, not knowing which way to go, and said, “John, come over here and stand next to me.”

It was then that we were told to look at the value of our cards.

Now I understood why I was so popular during the mingle portion of the exercise.

I was the 9 card, which was only one step lower than the 10 card.

We then discussed the importance of prioritizing tasks and how we treat others.

We should not treat the 2 any less than the 10.

Left a great impression upon me of which I hope is being passed along in this entry.

No matter how high we value ourselves, we must place an even higher value upon others.