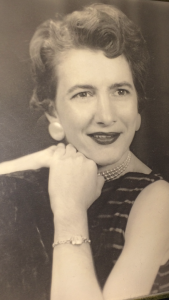 April 27, 2012, was a beautiful day. It was filled with sunshine, wonderful temperatures, some tears, laughter, friends, family, more laughter, bunch of hugs, kind words spoken, the promise of hope. It was the greatest day of my mama’s life.

And at 9:50 a.m. God heard a sincere cry of my heart, to let my mom go to sleep and let her struggle no more. I have no regrets. All hearts were clear, all words that needed to be said were spoken, and the last words being exchanged on Thursday afternoon were, “I love you.”

Interesting to me, and heart warming, is that my mom’s last words to a person were not to me at all. They were spoken to a friend, Tiffany Orr.

Tiffany Orr came into my mothers life in her final three days. Tiffany had told me that she wanted to meet my mom, that she had heard so much about her. I thought that to be a great idea so I encouraged her to visit anytime at the hospice facility. And in the final days of my mothers life Tiffany came at least twice a day, once in the afternoon and once at night.

On the final night before my mother passed away, I came by to tuck her in and say goodnight, and when I opened up the door, there was Tiffany, with my moms hand in hers, tears coming down Tiffany’s face. My mom was fast asleep.

I asked Tiffany about her story. She told me of her mother who would have been 80 years old if alive. My mom was 84.  Tiffany’s mom passed away from cancer. My mom would also pass away from cancer the next morning. There was something going on here, not earthly stuff. Heavenly stuff. Stuff that mattered.

And so, I am glad that Tiffany Orr found something in my mom that drew her closer, deeper than surface interaction. Somewhere over the last three days, it became a heart matter.

And then on the following morning, at 9:50 a.m., my mama, after a long run of nine years, with many people watching, much like Forest Gump, stopped in the middle of the highway of her life, turned and said to those who had been inspired by her journey, “I’m pretty tired…I think I’ll go home now.”