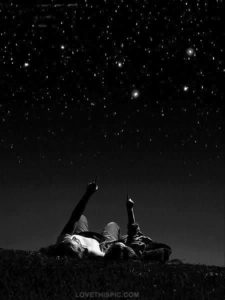 How often do you get to talk to God, to a five year old and to a two year old…all at the same time?

This past weekend I took a blanket to the home of the grandchildren, Beau and Adaline, and announced at dark we were going on an adventure…an adventure far far away.

We took the blanket out into an open field where there was little light, we layed back and begin to take in the beauty of God’s painting.

We spoke of Venus and how close it seemed and how actually far away is it’s distance from the earth.

We identified a moving plane against the dark backdrop and guessed where those people were going, and who would they see when they arrived.

As Beau, Adaline and I talked, I also began to talk to God and said, “God, how magnificent you are that you created all that we see and all that we cannot see so far far away and yet, even with all those stars that you have named, you also know Beau and little Adaline.”

Wishing for time to stand still, I tucked away for the future, the memory of a sixty year old, a five year old and a two year old, all staring in amazement as to the vastness of the heavens.

“When I observe your heavens, the work of your fingers, the moon and the stars, which you set in place…”  Psalm 8:3

Yet the creator of all that knows each of us…by our name.