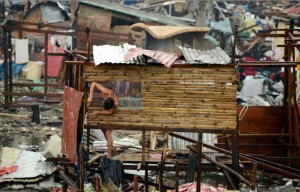 Of the many pictures I viewed from the typhoon damage in the Philippines from 2013, one captured my attention. It drew me in.

It crushed me and inspired me at the same time.

One man, surrounded by devastation, death and destruction refused to be defeated.

He would not accept a fate that was not his.

When all seemed lost, and it certainly appeared to be, he did not see the end, he saw a new beginning.

He began to rebuild as soon as the storm passed.

A man like that can change a city, a nation, a world.

You may be surrounded by devastation and rubble in your own life.

By negativity and bad news everywhere.

It may not be actual concrete and wood.

But the effects are as if a typhoon blew into your life and leveled everything to the ground.

And it may have.

Say to yourself as many times as you need to, “We cannot be defeated.”

Rebuild your life and let those around you be amazed at your defiance and reliance.

Your defiance of the enemy and your reliance upon God.

“We have troubles all around us but we can not be defeated.”  2 Corinthians 4:8