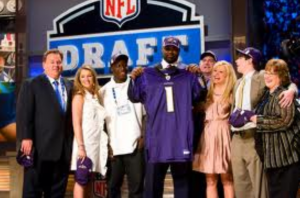 In the book, In A Heartbeat, by Leigh Ann and Sean Tuohy, they captured in five sentences what is the result of giving away hope.

The Touhys, are the family who adopted NFL player Michael Oher, the story behind the movie, The Blind Side.

Toward the end of the book, Leigh Ann and Sean recall, not what they gave to Michael, but what he gave back to them.

This perspective written by Sean, from Michael’s rookie season with the Baltimore Ravens.

“Each time he was introduced in the starting lineup, when the loudspeaker boomed his name and he ran onto the field, Leigh Ann would burst into tears.  When we analyzed why it touched us so much, we realized that of all the things Michael gave us, perhaps the greatest gift was hope.  Watching him on the field gave us hope that others like Michael could emerge from their desolate, dead-end circumstances.  It gave us hope that we could make a little bit of a difference.”  Page 237-238

Anne Frank is quoted as saying, “No one has ever become poor by giving.”

What are you giving away on this day?

Too white, too black, too this, too that?

Hope does not discriminate based upon skin pigmentation nor does it recognize cultural, socio-economic, national or international boundaries.

You already have it.

Just give it away.

Have little or no hope to give away?

Then give what little hope you do have away, and it will be returned to you.

Today at breakfast, lunch or dinner, along with a tip, leave a hand written note on a napkin for the server expressing your hope for their future.

They will tuck it into their apron and cling to it.

Come up with some small or large way to invest hope into another person’s life today.

Then wait, with patience, for the return on your investment.

You may not see it at first, but when it comes, either given or received, it will be obvious.