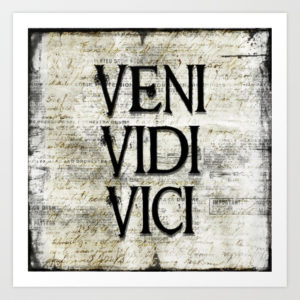 Daniel did not necessarily stand out from the other thirty five fellow employees that he was grouped with.

But there was something definitely different about Daniel.

I was drawn to Daniel, and over the course of the week, Tuesday, Wednesday and Thursday I would observe Daniel in different settings without interacting with him.

Finally on Friday morning I was in a classroom setting and as if it was meant to be I was seated behind Daniel and that was when I began to read his story.

On the back of his upper right arm, he had three vertical tattoos.

I recognized it as Latin, but I did not know the interpretation.

So I approached him at lunch and said, “Daniel, what’s your story? I want to know the importance of the tattoo.”

Daniel said, “John, it means Veni, Vidi, Vici…I came, I saw, I conquered.  It’s been special to me all of my life.”

At the moment I left it at that, yet I sensed there was more to his story, and I knew that in a few short hours Daniel would be getting on a plane to leave and it was possible I would never see him again.

I approached him before he boarded a bus to leave and said, “Daniel, really, what’s your story?”

Daniel said, “John, I was born with a disability and this is how I chose to defeat my disability, by putting Veni, Vidi, Vici on the back of my right arm.”

You see, Daniel, since birth had never been able to use his right arm.

Yet, it was on that very arm that he could not use, that he chose to defeat his disability.

I would encourage you to look into your own life.

What is it that you feel disables you?

That holds you back?

What keeps you from pursuing your dreams?

What keeps you from having an ongoing pattern of unlimited success in your life?

And when you recognize that, when you identify that which you feel disables you in your own life, I would encourage you…challenge you, to do as Daniel did and place Veni, Vidi, Vici symbolically upon whatever it is that holds you back, so that you might defeat it and be all that you were created to be.