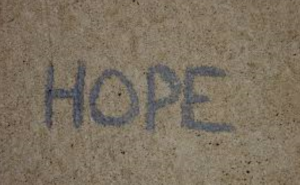 Suzanne Collins, author of the series, The Hunger Games, wrote, “You never forget the face of the person who was your last hope.”

Who would that be?

A parent, a lover, a priest, a doctor whose mission was to either save the life of a child or the life of the child’s mother?

We cling to hope which is beyond optimism.

We pray for the hopeless.

I am sure, though I can not proof it scientifically, that life expires one second after hope expires within one’s soul.

It’s a life long search for me.

And in finding hope and truth one also finds love and meaning.

I believe that a mantel of hope can be passed from one person to another.

I certainly believe that hope rises up in those moments of apparent hopelessness.

Raised in a home where a Bible was not allowed.

Mote came to profess Christ as a teenager and labored as a carpenter until he went into ministry later in his life.

You certainly will know of Edward Mote if I quote the first line of a verse he penned in 1834.

“My hope is built on nothing less, than Jesus’ blood and righteousness.”

Maybe Suzanne Collins has it right.

For those who are believers and we reach that moment when hope then life is gone, it is then that we remember the face of Christ as we are received into the arms of God.

“You never forget the face of the person who was your last hope.”

Christ…your one, your only, your last hope.