Hope is all we do have. 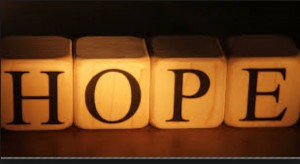 “As had become standard for those days, I started to ask the Lord for strength, but the strangest thing actually came out of my mouth.  ‘Lord, make me weak. Make me realize that I can’t do this, I never could.  Make me realize and act on my weakness by surrendering to your unending power’.”

His words, not mine.  Without a name but not without something to say.

Words that were emailed to me in response to a previous entry on the blog.

Words that were sincere, heart felt and that detailed struggles which were life altering.

A lot of people could have written these same words as we each have challenges that seem so hard to overcome.

But he spoke of being away from his family as he worked through some difficult issues.

He spoke of leaving his home on a Saturday morning only to return that afternoon and his family was gone.

His wife had left and had taken everything that was precious to him with her, including their son.

Our prayers in the time of overwhelming and insurmountable odds usually contain the words, “Lord, give me strength.”

He prayed for weakness.

Who in their right mind prays for weakness?

The person that has come to the realization that through confessing his weakness, he would find God’s strength.

I read his email over and over and then meditated on it this afternoon.

We get to the end of our determined strength, and then we either give up in despair, or we realize that any step beyond the present one is going to have to be given by a greater power, in my belief system, God.

In the one true belief system.

The one true God and his son, Christ.

I am so over warm fuzzy preachers and their watered down belief systems.

When the storms come and the waves are crashing in, the watered down fuzzy gospel leaves only broken lives after the storm is gone.

“Why are you in despair, O my soul?  And why are you disturbed within me?  Hope in God, for I shall again praise Him, The help of my countenance, and my God.”  Psalm 43:5

The above verse is almost identical to Psalm 42:11 except for one word…“again”.

That one word adds a more passionate and hopeful outcome.

That verse can also be interpreted as saying, if I hope in God. as I have before, then I will again, like before, as I have prior to this calamity, be strong once again in God, because I have placed my hope in Him.

In his email he went on to further define desperation.

“In my mind, desperation is when some one has little or no hope in whatever situation they are in, and hope is the realization of the fact that “hope” is in fact all we do have.”

To quote my unnamed friend.