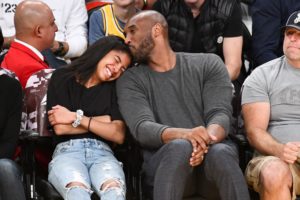 In a previous life it seems like, I had the pleasure of working with, for a day, Shaquille O’Neal and Kobe Bryant.

The memory of that day came flooding back to my mind as I watched the breaking news regarding Kobe Bryant and his daughter Gianna.

Personally reflecting as most of the world is, taken back by this loss, I stated to a group, one never knows upon entering a day if the day will end as was intended.

Who can grasp, fathom or understand when a husband, father and daughter are taken from those who love them?

No philosopher, pastor, priest, or poet can adequately explain such loss.

Why would God allow such a thing to happen?

God has stopped tragedies from happening many times before.

Why not this time?

What kind of divine plan could this be?

Asking with no answer.

Pain with no purpose.

These events confirm how fragile life truly is.

We know not the end of our days.

We place our faith in a future we often cannot see.

Yet we believe in a God who’s got the whole world in His hands.

We trust in His divine plan for our lives.

My hope is found in Him.

This specific event has caused me to think most about the relationship between Kobe Bryant and his family, particularly with his daughters.

Similarities between Kobe Bryant and myself?

An article covering this tragic event stated that the last thing Kobe Bryant and his daughter did together was attend church early that morning before boarding the helicopter which would never arrive at its intended destination.

I too have taken my daughters to church.

I too have taken my daughters to basketball games.

I too have flown with one of my daughters in a helicopter.

And I too, along with millions of others are touched by Kobe Bryant’s devotion to his family, his daughters and his God.