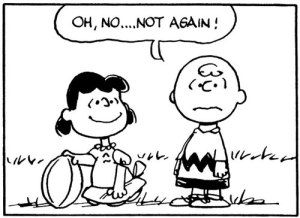 “Emily, you don’t run in marathons, you compete in marathons.  And you are telling me you can’t resist a cookie?!”

Emily and Alex are about as fit a couple as I have ever met.

Recently Emily and I were discussing why people repeat patterns they know they shouldn’t.  And what’s more, they, we, often repeat the patterns of the repeated patterns.

She was being hard on herself that while in training she had eaten a cookie.  But not just any cookie.  This was a cookie which had the power to take over someone’s self control, who is otherwise extremely disciplined.

Since then I have given much thought as to why any of us…all of us…do this same thing.

We repeat the pattern of patterns.

Similar to the characters Charlie Brown and Lucy from the comic strip and cartoon Peanuts.

Lucy holds the football for Charlie Brown to kick.

Charlie Brown tells Lucy he is not going to try and kick the ball because he knows that she is going to pull the ball away and he will end up on the ground.

She assures him, not this time.

And he does it over and over again.

We know what to do.

We know what not to do.

We know what not to do because we have repeated this pattern before and the results were anything but positive.

Yet we do it anyway.

Whether it’s a marathon runner who cannot resist a cookie.  Whether it’s someone who has chosen bad relationships over and over again, whether it is any past experience that should not be repeated, resist the urge to continue the pattern.