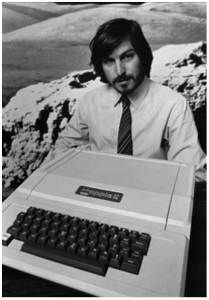 “Here’s to the crazy ones.  The misfits.  The rebels.  The troublemakers.”

“Here’s to the crazy ones.  The misfits.  The rebels.  The troublemakers. The round pegs in the square holes.  The ones who see things differently.  They’re not fond of rules.  And they have no respect for the status quo.  You can quote them, disagree with them, glorify or vilify them.  About the only thing you can’t do is ignore them.  Because they change things.  They push the human race forward.  And while some may see them as the crazy ones, we see genius.  Because the people who are crazy enough to think they can change the world are the ones who do.”

What an amazing statement.

A recounting of the turbulent sixties?

Steve Jobs, Lee Clow and the creative team of Ken Segal and Craig Tanimoto of TBWAChiat/Day came up with that statement upon the return of Steve Jobs to Apple and for the Boston MacWorld of that year, and it is quoted in the book, Steve Jobs, by Walter Isaacson.I asked a college age student recently, what were their plans to change the world.

They said, “Maybe not everyone is supposed to change the world.”

Why would any of us be given breath and life if we were not supposed to change the world in which we live?

We are wired so specifically and so uniquely.

My friend and fellow writer, T.J. Brand put it this way, “Do not let anyone around you simply exist.”

Take a look at the world in which you live.

Forget about yourself for a moment.

Are there people in your life that are simply existing?

And if so, why are you allowing that to happen?

Give others hope for today, and a positive outlook for tomorrow, and you will have changed the world for the future.

And then, they, like you, will be people who are crazy enough.