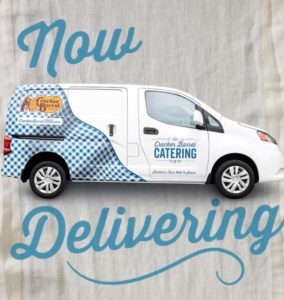 Hunter did not wake up that morning thinking I was headed straight toward him. But I was.

At a Quick Trip forty miles outside of Atlanta, Georgia, I was fueling up for the trip.

And there he was.

However, he was in a Cracker Barrel catering van. He had the brown apron on, looked professional.

But something was drawing me to him. Not in a creepy way.

More in a supernatural, this must be fate kinda way.

At first I was not going to approach him. However…something told me I was supposed to.

Hunter being written on his Cracker Barrel apron made for an easy in to the conversation.

Me: Good morning. Do you mind if I ask you a question? I survey people all over the nation when I travel and I am a writer, so it’s not unusual for me to approach someone like this.

Me: If you weren’t delivering Cracker Barrel catering what would be your dream job? If I was a job genie and could make it happen, what would it be?

(Hunter did not even think about it. It was almost as though we had rehearsed this.)

Me: Okay. Tell me about it.

Me: Hunter, how old are you?

Me: My gosh! Are you serious?! Hunter, you are only nineteen years old and you have already given up your dream.

Me: Hunter, what if out of 7.7 billion people on the planet, on this day, at this time of day, I was supposed to come into your life for just a second and remind you not to give up on your dream?

Without saying anything further I thanked him and walked away.

However, before he got back into the Cracker Barrel catering van, I said from a distance, “Hunter, what if?”

I will never see Hunter again but there was something about that exchange that was supposed to happen.

Maybe for Hunter…maybe for me.

Maybe I found my own calling.

Reminding people of theirs.