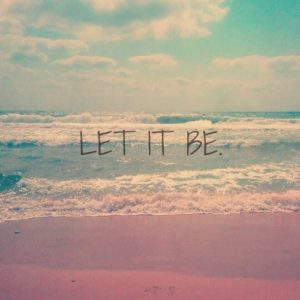 Who could have guessed that such a positive message of hope could come from a troubled beginning?

It wasn’t until recently that I was watching a segment from James Corden and Carpool Karaoke, and learned the history of this iconic song.

If you are familiar with this series, James Corden invites musicians along to carpool. In this segment, he picked up Paul McCartney.  As they drove around Liverpool, England, Penny Lane, and all the sites from A Day In The Life, etc., where McCartney grew up, it was listening  to the history which became the inspiration for multiple songs written by Paul McCartney.

Even if you are not a fan of the Beatles, you are familiar with the song Let It Be, one of their most well known pieces, both lyrically and musically, even outside of pop music.

What you may not know…is how the song came to be.

Out of the explanations that have been relayed to me previously regarding Let It Be, I had never heard this version.

As told by the writer of the song itself.

Paul McCartney’s mother passed away when he was only fourteen years old.  Going on to form The Beatles later in his teens, probably the most well known band ever in history, he would use his experiences growing up in Liverpool for inspiration.

One of those songs, Let It Be, was no different.

As explained by McCartney, The Beatles were coming out the very turbulent Sixties, both for the world and for the band, who was in the process of breaking up, after having achieved world wide fame.

McCartney said one night he had a dream.  And in that dream, his mother came to him to reassure him, that despite everything he was going through at the time, it would all turn out okay, to just let it be.

When he woke he thought to himself, “What was that dream about?”  Yet the phrase, Let It Be, kept coming back to him.

And he wrote Let It Be out of that experience.

And out of his mother’s passing, and all the times of trouble he found himself in, he could find peace and from his departed mother, speaking words of wisdom…”Paul, let it be.”

What a positive message for decades from a very troubled beginning.