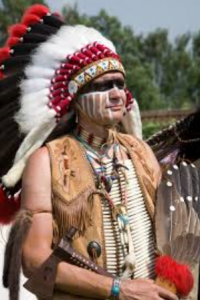 As a teenager I grew up in what was then a small rural community called Stockbridge, Georgia.

One red light kind of town. I would not change my upbringing, I loved it.

In our community, each year there was an annual festival called “Ole Stockbridge Days”.

One particular year, several friends of mine and I were walking around being teenage guys.

There was a Native American in full costume performing bull whip tricks.

His assistant would hold up a playing card and he would literally snap it out of their hand in mid-air.

He was a showman.

To involve the now gathering crowd even more, he asked for a volunteer.

With no one stepping forward, he picked someone from the crowd.

And who he picked was my friend Bruce.

Bruce stepped forward not knowing how he would be involved.

The Native American in full costume brought Bruce a playing card, handed it to him and told him to place the card between his knees and hold it there.

There was a nervous laughter that went through the crowd as the Native American in full costume started marking off his paces while cracking the bull whip at the same time, building the drama.

As Bruce stood in the circle of people he now had the playing card firmly placed between his knees, and if you know anything about the human anatomy, you know that the knees are only a short distance below a very important part of a man.

A part so important that no man wants to have someone from several paces away cracking it with a bull whip.

As the Native American drew back one final time, Bruce said out loud, but with a hint of a prayer in his voice, “It ain’t much, but it’s all I got.”

Everyone there cracked up and then there was one final crack of the whip and Bruce no longer had the playing card between his knees.

I have thought of that moment and Bruce’s comment many times over the years.

We each have gifts and talents within us.

And life and it’s up and downs will test those gifts and talents. And we even at times may hear the voices of discouragement which surround us cracking the whip trying to scare us, trying to intimidate us, trying to keep us from expressing our talent, our gift.

And our approach to our gift should be the same as Bruce stated, “It ain’t much but it’s all I got.”

And we can only hope that as those dissident voices are cracking the whip it doesn’t hit us right where it hurts.

And compared to our unlimited potential our individual gifts may seem small.

But are they really?

Your gift and your talent may not be much in your eyes, or possibly in the eyes of those around you, but, it is all you got.

Mother Teresa is quoted as saying, “Not all of us can do great things. But we can all do small things with great love.”

Take your seemingly small gift and do great things with it.