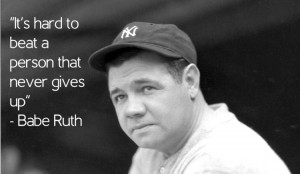 Alternate your plan and mental approach for the remainder of the day.

Maybe you are disappointed by those around you.

Seek out new people to surround yourself with.

Maybe you are dismayed by circumstances.

I came across this quote from Babe Ruth earlier today and will post it near my desk.

If you simply refuse to give up you can not be beat.

I had a friend in high school, Bobby, who has since passed away.

I have met a lot of people, and many years later, Bobby remains one of the most interesting people I have ever met.

Bobby was a magnet for trouble.

Either way, they would find each other.

Bobby was one of those people you meet in life that would cry with you one minute and be in a fight with someone else shortly thereafter.

Fortunately, Bobby always seemed to be watching out for me, except when he was pounding me at football practice.

I remember Bobby getting in a fight on a Friday night after a football game.

Bobby, as he was prone to do, would come to the rescue of someone smaller that was being picked on.

Bobby was getting ready to pound this guy in the parking lot of a local pizza place.

It may have appeared to some at first that Bobby was losing the fight.

What the other guy did not know, and if he would have asked me before the fight started, I would have informed him, “Pal, you can’t win, because Bobby will not quit. He does not know how.  You sir, should prepare yourself for a whupping.”

So today, in my own life, I am going to take the same approach that Bobby and Babe Ruth took…as long as I am fighting, then I am winning.

You can not be beat if you never give up.