One cup at a time. 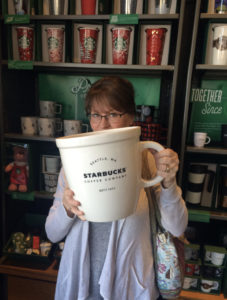 One customer at a time.

When Howard Schultz, Chairman, President and Chief Executive Officer of Starbucks came back to the company in 2008, he found that the leadership was focused on opening new stores globally, but had lost it’s original focus.

In his book, Onward (How Starbucks Fought For Its Life Without Losing Its Soul), Schultz communicated the loss of the one on one touch this way.

“With such a mind-set, many little things dangerously slipped by unnoticed, or at least went unacknowledged.  How could one imperfect cup of coffee, one unqualified manager, or one poorly located store matter when millions of cups of coffee were being served in tens of thousands of stores?”

You may have ten managerial positions to fill within an organization, but you can only qualify, or vet, one candidate at a time.

If you lose your focus off the one, you have diminished the ten.

It may be that you are expected to produce fourteen dozen of a specific product each day.

However, the product can only be produced one at a time.

The individual pieces are then packaged and sold in quantities of one dozen.

If you pay the slightest bit less attention to one of those twelve individual pieces, the customer will not return the one, he will return the twelve.

Simple thought but with great consequence if ignored.

In retail, you are serving one customer at a time, effectively.

You may attempt to serve all customers, ineffectively, when you look beyond the needs of the one.

Every one hundred of everything starts with one of something.

One is the beginning of many.

On Wall Street, or Peachtree Street…

…a Board of Directors has not gathered.

Rather specific individuals who will determine the collective progression of a company or organization, now sit in a board room.

Their concerns must be addressed, one at a time, in order for the entire company or organization to move forward, cohesively.

At a press conference, one question is answered at a time.

A public speaker does not address an entire audience.

They speak to individuals as they sit together as an audience.

A flight attendant makes an impression to an entire flight, one passenger at a time.

A teacher in a classroom of twenty eight students?

In our personal lives, one friend is the foundation for many friendships.

When it comes to people.

Serve them one at a time.

When one person is standing in front of you, invest your undivided attention into that one person.

When you do that, your return will be lined up out the door.