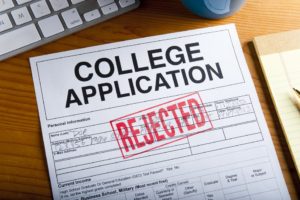 We check boxes throughout our life.  Some important, some not important.  Natalie Ann checked a box.

Drove an SUV and took her kids to games, school events, rehearsals, recitals…all of that.

And one of her children attended and graduated from The Julliard School, one of the most prestigious musical institutes in the world.

Except, here is where her story took a turn.

So she began to apply to multiple schools.

And was denied acceptance by each.

As you might imagine, she was devastated by the rejection.

So, what did Natalie Ann do?

The university she dreamt of attending responded.

Natalie Ann tells this part better than I ever could.

“I recall the moment I received the acceptance letter and how welcoming it was.  The letter was filled with such acceptance, (something I hadn’t experienced from any of the colleges I applied to previously).  They even used my nickname, ‘Nat’, during the salutation greeting of the letter, (Dear Nat), which made the acceptance even more special.  It was personal, sincere, and filled with excitement.  The letter stated they were thrilled to have me join their student body in the fall as a freshman.  My heart leaped with joy.”

Natalie Ann continued, “Unfortunately, that moment didn’t last long because, I realized I couldn’t attend the school of my dreams in the fall.  The reason I could not attend was simple…I had lied on the application.

The university thought they were accepting Natalie Ann, white, middle income, middle America, everything they were looking for in a student.

You see, Natalie Ann is not white.  She had changed her racial status on the re-application from “black” to “white”.

Natalie finished the story this way, “I lied on the resubmission because of so much rejection.  It was a test…I wanted to know if my merit and credentials were good enough, (which they were).”

“I simply had the wrong skin color.”

Let that sink in for a moment.

Sink in past the pigmentation of someone’s skin.

Natalie Ann went on to apply and to be accepted to a Historically Black College and University, where she completed her undergraduate work in computer science, and then went on to earn an Executive MBA from the Jack Welch Management Institute, a subsidiary of Strayer University.

Natalie Ann checked the right box and was rejected.

She then checked the wrong box and was accepted.

“I simply had the wrong skin color.”

When will we finally see people as they are…and not as we wish them to be?