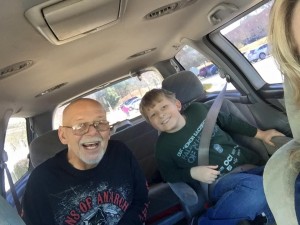 “We must be willing to let go of the life we have planned, so as to have the life that is waiting for us.”  E. M. Forster

Father’s Day 1970… A nineteen year old new father himself, living with his young wife, new baby, father and mother finds his own father collapsed in a hallway of a heart attack.  His own father would pass away that day.

Probably not the Father’s Day this first time dad had planned for.

2003 – A stroke leaves his left side affected, losing his ability to play the drums, of which he lived for and helped support his family.  Had to re-learn how to feed himself, walk again, dress himself and tie his shoes.

2003 – Ruptures two discs in his neck and begins recovery from a major stroke and disc surgery at the same time.

2005 – Has triple by-pass surgery and as a result his kidney’s shut down and immediately goes on dialysis.

2006 – While hunting, falls and destroys his right shoulder, having it rebuilt with seven pins and anchors which reattaches the tendons and muscles.

2009 – Goes through a kidney transplant with the kidney being donated by his youngest daughter.

2010 – Wife is diagnosed with Lou Gehrig’s Disease and he would become her care giver.

2015 – Due to infection, six toes have to be amputated, followed by the amputation of his left foot and part of his lower leg.

2016 – Many weeks of rehabilitation and awaiting a prosthetic limb while recovering.

And so much more, even to the date of his passing.

And after all of this as I sat at the end of his bed, he said, with tears running down his face, “I believe with all my heart God has brought me through this because He has something else for me to do.”

What has God brought you through?

What is left in your life to accomplish?

Your life has brought you to this moment.

What will you do now?

Your life is not over.

And even though life is not turning out as you had planned, the plan for your life is turning out…just as it should.

(Sonny has passed from this life into the next.  What an impression he left upon me to remember him by.)