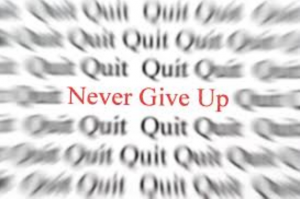 Many give up, just days before discovery and seconds before success.

Creates pretty rainbow formations when applied to an empty aquarium.

Spray on bathroom mirror to help keep from fogging.

Spray a watch band to keep it from pulling out your hairs.

Some simply have the will to keep on fighting.

Others have determination which will not be denied.

And many, including myself, are just too stupid to accept something cannot be done.

Even stupidity can be a strength.

I use it all the time.

The will to continue against successive shortcomings is what separates the great from the good, the magnificent from the mediocre and the leaders from the laggers.

In the early 1950’s the Rocket Chemical Company failed over and over to achieve positive results from a water displacement formula they believed at that time would have specific uses.

After having failed at thirty nine attempts, on the fortieth try, they succeeded, and they named the product Water Displacement Forty, also known as…

…which uses included those listed previously and also thousands of others, both practical and just plain weird, but all successful.

You may have a thought, a dream, an invention, a book, a new way to approach an old problem.

Keep attempting and succeeding at failure until you achieve success.

One last successful failure may come right before you fail to give up on your next attempt to succeed.