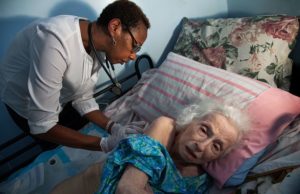 Sitting in a room at a hospice watching someone you love slowly drift way.  And then…

…then in walked April.

Earlier this evening a friend had told me about a nurse at the same hospice that her grandmother was at, which is where my mom is currently. She said there was a nurse we must meet. One of the kindest souls we would ever meet.

My daughter, Savannah and I were in room #111, there ‘s a knock at the door and in walks a nurse.

It was her. It was April.

We asked a lot of questions. She is fifty yet looks younger. Six kids, nine grandkids, all these wonderful stories of things she had been through, why she became a nurse, a lot of great stuff.

Then I asked her what was the most touching memory she had in working as a hospice nurse.

She said there were two.

One was a sixteen year old young man with bone cancer. At the time April had a fourteen year old son herself. She and the sixteen year old became buddies and he thought she was much younger than she was. His family was also young and did not know how to handle this type of situation so the young man relied on her for support through this ordeal. On a specific day he began asking her how old she was. “Are you over twenty? Are you over thirty? Are you over forty?” April kept saying yes. He then said, “Would you hold me?” She said she took him in her arms and held him like a mother would hold a son. It was in that moment and in her arms that he died.

She said there was one more.

A woman who was HIV positive, married, had made some mistakes and here she was, at Sacred Journey Hospice. An area hospital in another county had admitted her but would not bathe her, groom her or come anywhere near her because she was infected with the HIV virus. It had been so long since she had been bathed that her condition had worsened and she was embarrassed for her husband to come in the room because of the way she smelled.

April told her she was going to take care of her and gave her a shower, brushed her hair, painted her nails while her husband was away. The woman cried the entire time she was being bathed because it had been so long since someone had touched her and shown her love. When she fell asleep April painted her toe nails and it was not long after that she passed away. When her husband arrived he did not recognize his wife because she looked so different, so beautiful. He sat beside her now lifeless body and cried because he did not remember her looking that way and because of the kindness of April.

Tonight, I have no challenge, no warm words of encouragement, no inspiring thought to follow, except to say.

What would happen tomorrow if we walked toward the same people that others were walking away from?