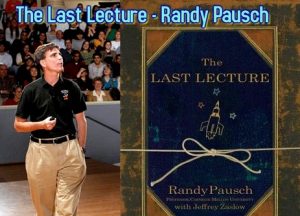 If you were asked to condense your life into a sixty minute presentation what would you say?

And that is exactly what Randy Pausch was asked to do.

To give his last lecture.  Literally.

Randy Pausch, college professor, was asked to speak in an ongoing series entitled The Last Lecture.

Except for Randy, it would be a lecture that many would remember him for.

Randy was only months from passing away from pancreatic cancer.

His lecture became a video watched by millions and later became a book also entitled The Last Lecture, which I recently finished reading.

In the book, Randy Pausch asks the question, “How do you sum up your life in sixty minutes?”

I have asked myself throughout my life, what really matters?

Not what do I think matters, but what, in the grand scheme, actually matters.

You and I have to determine that for ourselves.

How do we spend them?

Do we consider something important simply because someone else says it is?

Do we spend our time worrying about an event that took place long ago or will never take place at all?

Every now and then, it may be worthwhile to ask ourselves this question, if we were asked to condense our lives into a sixty minute presentation, what would we say, which photos would we show, what would our life reflect in sixty minutes?

Consider each moment of every day a miracle and find that treasure in your life.