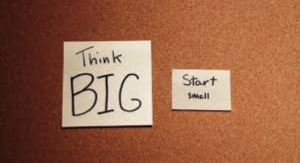 What can a woman who is five feet six inches, and maybe one hundred and thirteen pounds give to a man who is six feet five inches and two hundred and ninety pounds?

Something no bigger than her enclosed fist but that will save his life.

Can one man, a mechanic, change the world?

He can change not only one person’s world, but many worlds through a mentoring program.

What small thing do you have in your life that can mean something big to someone else?

A man had only a walking stick in his hand and led millions out of captivity.

A man kills a thousand others with the jawbone of a donkey.

A teenager kills a giant with one small stone and defeats an army, saves a nation and changes the course of history.

A widow with only a handful of flour and a little oil in a jar, feeds a prophet, and she and her son never go hungry again.

A cloud the size of a man’s hand brought a tremendous storm ending a national drought.

A tiny mustard seed grows into a plant large enough for birds to nest in it.

A poor elderly woman gives two small coins and it ends up being written about in the all time best selling book.

A small boy with five pieces of bread and two fish feeds thousands.

A mother sits at her computer hoping to encourage one and ends up encouraging many.

A couple sells jelly and raises thousands to benefit others.

One man with a vision.

One woman with a dream.

Billy Payne, who had the vision to bring the 1996 Olympics to Atlanta, Georgia, began the quest the day after his local church dedicated a building of which he had chaired the fundraising committee.  He wanted to feel that sense of “goodness” again.

What small gift do you already possess that would make a big contribution in others?

You may have always wanted to mentor.

You may have wanted to teach teenage girls about self worth.

You have dreamed of doing this and had visions for doing that.

Then do this and do that.

You are wired with a specific schematic toward life.

Then take girls in the pregnancy crisis center program and teach them to cook and bake.

There are needs all around you.

I have just completed reading a book by Adam Braun entitled, The Promise Of A Pencil.  At twenty five years of age, with twenty five dollars he began a non-profit organization that now establishes schools around the world.

Why?  Because Adam asked this kid in India, “If you could have anything in the world what would it be?”

The kid simply wanted to learn.

You do not have to search for your small gift.

It is already in place.

You know what it is whether you will acknowledge it or not.

You know it because it rarely leaves your mind.

You are prepared to do it.

Your small is about to turn into something big.