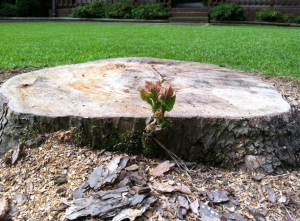 There was a tree in the front yard of my house.  It was dead.

It had no foliage.

It had no signs of life whatsoever.

In fact, it was an eye sore.

Maybe even a little dangerous if it were to fall.

Representatives from tree service companies would stop by the house and ask if we would like for the tree to be removed.

It had no purpose that we could see.

The tree was eventually taken down and all that remained was a stump surrounded by green grass and a few remaining pieces of bark.

I thought nothing more regarding its existence.

As far as I was concerned, the tree was never there at all.

…when I looked to where the tree had once stood and noticed a tiny branch with a leaf extended growing out of the base of the stump.

Life still existed in what was considered dead.

The tree refused to die.

It was as though the tree was saying, “Consider me dead, ugly and with no purpose.  Cut me down, chop me into pieces and remove me from your sight.  However, I will not die!”

You may be at a place in life similar to this tree.

You were considered dead.

You even felt dead to yourself and everything around you.

People said you were ugly, of no use, without purpose and possibly even dangerous.

Others may have cut you down to a stump, chopped you into pieces and even removed you from their lives.

Yet, something inside of you refused to die.

You would not go away.

You felt yourself growing again.

You pushed and pushed and with the strength from the sun and what felt like rivers of rain, you escaped from the den of death, and you were once again reaching for the sky.

You wanted to again be a tree that provided beauty and shade.

You wanted to again be what you were intended to be, a source of life.

You can not be killed, if you refuse to die.

Refuse to absorb the negative surroundings of your environment.

Refuse to be contained and boxed in by your own self denial of a divine design for your life.

Be the stump that grew back and use the opportunity to tell your story and how from a stump can grow a mighty tree.