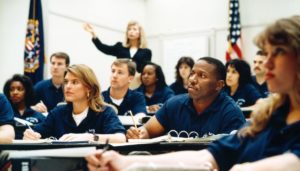 Coming from a former FBI agent the phrase caught my attention immediately.

We were participating in a group discussion regarding the development of leaders, a broad topic at times.

Someone in the group referenced that a tough and often negative reinforcement might be needed to develop leaders, old school if you will.

Then Tim, who I knew had once served as an agent with the FBI spoke up.

He said, “Our first week at the FBI Academy was intimidating.”

You could feel the rest of the group in the discussion lean in.

Even then, my mind went to what I had previously read at the FBI website regarding New Agent Training.

New agents go through 800 hours of training, which lasts approximately 20 weeks.  The trainees are supported by their classmates, class supervisors, counselors, and instructors as they go through firearms, physical, academic and operational skills training.

A new trainee cohort is often made up of attorneys, accountants, law enforcement officials and others with highly trained professional backgrounds, not all of which you would think would be determined to join this elite organization.

Tim said, “Your first week, you are looking around at those in the room, very smart people, and you are wondering to yourself, what am I doing here?”

And then he continued, “The instructors know this and they told our class, ‘Some of you are thinking you don’t belong here.  Why would you think that?  We sought you out.  We recruited you.  We did not bring you here to fail.'”

We did not bring you here to fail.

In business, in sports, in life, in any type of training, in the development of leaders, what if you, what if we, had the same approach.

Rather than the negative “we are going to weed out the weak” style of training, what if we actually approached the development of others in a positive manner, helping them to identify their strengths, and how those strengths can be used for the greater good.

I mean, if it works for the Federal Bureau of Investigation, why would it not work for the rest of us?

We did not bring you here to fail.

A great lesson in leadership learned.