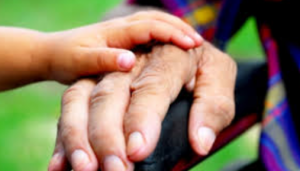 A survey of elderly people, above eighty, was taken as to what they missed most from their life.

Across the board, they did not miss a deceased spouse, or days gone by, or even better health.

Above all else, what they missed most was the human touch.

As people get older they are touched less, though the need for physical touch increases.

Human touch is so important.

It can certainly heal.

Before she was tragically killed, Princess Diana made an intentional effort to visit HIV / Aids patients.  She would not put on any protective clothing or gloves.  As she was one of the most photographed people in the world, she wanted the world to see her touching them, holding their hand.  And she wanted those patients to find hope and strength in her touch.

The touch we offer, and the touch we receive, does have an exchange of strength.

Let me encourage you to go see through a different lens and with a new outlook regarding touch.

All powerful examples of touching.

Especially, if you come in contact with an elderly person.

Make a special effort to touch them.

To take their hand in yours.

To do whatever it takes for them to feel accepted and normal again.

As a physical human being should.

Try it and watch someone light up.

Watch and see if it is almost as though God himself reached down out of heaven and placed his hand in theirs.

He does…and He will…through you.