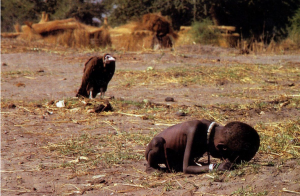 I received a phone call from a friend.  My friend’s name is Jeff.

Jeff has encountered many “Mikes” in his life as well.

Jeff went on to say that it is his goal in life to give away to others all that God has given to him.

Jeff is known for his generosity and benevolence.

He does the right thing.

Our conversation reminded me of an iconic photograph I came across a few years ago.

That photograph is attached to this entry.

In March, 1993, journalist and photographer Kevin Carter was working in southern Sudan, near the village of Ayod.

Known for it’s drought, famine and poverty it was not uncommon to see starving and dying children in southern Sudan.

Kevin Carter took a photograph that would bring him wide but brief notoriety.

A vulture stalking a toddler close to death.

Because of the rules placed upon journalists, and the danger of the spread of disease, Kevin Carter could not pick up the child.

He waited twenty minutes for the vulture to hopefully fly away.

Finally, as a photographer he took the picture which would be published by the New York Times on March 26, 1993.

The disturbing photograph went around the world.

Hundreds of letters and calls came in and people wanted to know the outcome of the toddler and why the photographer did not do something to save the child.

He was depicted as a vulture himself, preying upon the misery of others.

Unknown to the readers, the noise of the camera caused the vulture to leave and the toddler gathered enough strength to somehow walk away.

Because of the haunting nature of the photograph and how it had captured the image of poverty, Kevin Carter won a Pulitzer Prize.

Kevin Carter would later confide to a friend, “I’m really, really sorry I didn’t pick up the child.”

Kevin Carter would not enjoy his Putlitzer Prize for very long.

Haunted by the violence he had witnessed in southern Sudan, and not knowing the toddler’s fate, he committed suicide three months later.

You do not have travel to southern Sudan to witness plight, disease, devastation, hunger and violence.

Most likely you would not have to travel far at all.

What rules are you following, knowing you should do something outside of those rules?

What child are you not picking up?

What food are you not delivering?

What clothing are you not giving away?

What hopeless person are you not providing hope?

What spontaneous and random act of kindness are you withholding?

There is a disturbing verse in the book of James that has caused me much distress, ever sense I was able to comprehend it’s meaning, many years ago.

Jeff has lived a life of doing the right thing.

Kevin Carter, if given the chance again, would do the right thing.

Do the right thing.