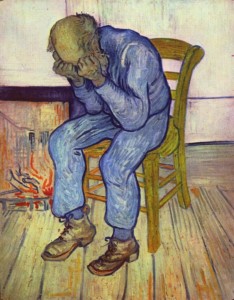 When all you have is belief, it is enough.

You hear the doctor’s voice, but it has become distant, you can no longer make out the words.  It is as though he is in another room.  The doctor continues to speak directly to you, however the last words you remember him saying is, “She has six to twelve months to live.”

The voice mail was so sweet, innocent, playful, the last words you heard from the greatest person that ever walked into his life was, “I love you.”, and he never heard from her again.  The police report said she simply vanished.

One wife, two children and a mortgage.  In one short exchange, four days before Christmas, he went from a six figure annual salary, with a car, a posh office, travel and other perks, and five minutes later he was walking out the door with a box of mementos, no severance, no vacation pay, Merry Christmas.

No additional treatment will heal her, no middle of the night phone call will bring her back, no words of encouragement can be deposited into the bank account of faith.

Ancient text tell us, “Anything is possible if you believe.”

Kinda hard to misinterpret that.

Taken out of context it says, “Anything is possible if you believe.”

Taken in context it says, “Anything is possible if you believe.”

Turn the sentence around and it says, “If you believe, anything is possible.”

It has the same meaning.

Why are we afraid to believe for the impossible?

We are given creative talents and we only believe for the smallest of dreams.

We are given the ability to create wealth and we settle for a safe amount.

We are given the vast limitless supply of hope, of which it’s value is so high it can not be measured, we have it and can not grasp it’s potential.

You may have been given the worst news, a devastating set back, a medical report that is bleak, a future that forecasts no job, guaranteed financial ruin, you will lose the house, lose the car, lose everything you have worked toward, the future looks impossible.

When all you have is belief, all things are possible.

You are not the loser, you are the winner.

You will not die, you will live.

As it was with Job in the Bible, the second half of your life will be greater than the first half.

You need only to believe.