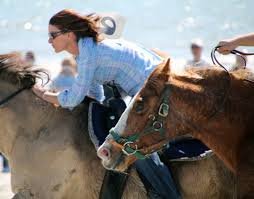 The meeting was coming to an end, and I asked, “Did you grow up around horses?”  Their answer, “I did not.”

We had just completed a discussion on leadership, and, how at times passionate leadership may seem to, if you will, be running almost beyond themselves, needing to be restrained.

It was then that I asked if they had grown up around horses.

I followed up the question and said, “I did. And you always want a horse that you have to rein in, not one you have to constantly boot to go.”

It was not fifteen minutes later that I ran into a colleague that I knew was very involved in the equestrian community. I recounted my statement to them regarding reining in and not having to boot a horse to go.

“Absolutely. I would rather tell a horse to whoa rather than tell it to go!”

Such is leadership as well.

When we are looking for future leaders to develop we should look for the ones who are energetic, raring to go, where we have to bridle and direct their passion rather than trying to motivate them to think, create and innovate.

When assessing your current talent on your team, not to compare them to horses, which by the way are the most beautiful animals ever created. But to determine which of those potential leaders are the ones to run, not walk. Which have the passion to lead and be directed at the same time.

In developing leadership, you would rather say, “Whoa!, Not go!”