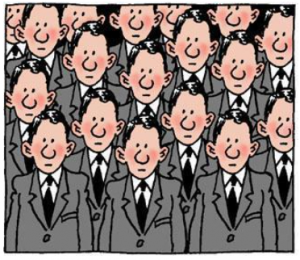 “Most people are other people.  Their thoughts are someone else’s opinions, their lives a mimicry, their passions a quotation.”  Oscar Wilde

Each of us strive to live a life of individuality.

We want to stand out.

We long to be counted on the merits of our own existence.

To be recognized is one of a person’s strongest needs.

We live in a battle over the loss of personal identity.

We each experience this in our own lives.

I was identified as the new born son of Al and Camilla Rowe.

In 1965, I would become the adopted son of Frank Hembree.

In 2015 I became someone’s grandfather.

In 2017 I became a grandfather again.

Through each event and each stage of my life, I have been diminished to who I am today.

Not an individual at all, but as a part of the lives of others.

Sure, I have individual traits that are all my own.

I have an individual finger print and my DNA is only recognized when it is identified as mine.

But now I am more identified with others than I am as “me”.

We lose more and more of our identity throughout our life as we are identified with the lives of others.

Lose yourself in others so that you might find yourself through your reflection in someone else.