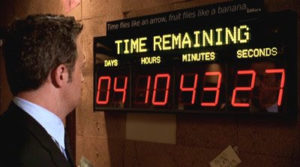 My mother recently said to me, “Johnny, I will see you soon.”  You see however, therein lies the problem.  She passed away seven years ago.

Dr. Christopher Kerr delivered a Ted Talk in 2015 with the topic, “I See Dead People: Dreams And Visions Of The Dying.”

Dr. Kerr is  a physician whose patients are dying, literally.

In this Ted Talk he references multiple patients who have, as they neared the end of their own life, would begin to either have visions or dreams of parents, siblings, spouses, children, friends who have passed away, some many years ago.  And in specific cases those who had gone on before were welcoming those who were soon to pass away into the afterlife.

Which brings me to my mother.

Over the course of the past weeks I have dreamed about my mom on several occasions.  In one dream, the most recent, I remember her saying, very clearly, “Johnny, I will see you soon.”

Which got me to thinking.

The management of time and the expense of our days has long been a fascination of mine, almost an obsession with me.

To capture every moment, to seize every day.

And now that I am approaching sixty years old, the bulk of my life is behind me and I have to be careful with what time I have left.

And what will I do with that ever passing time.

What about in your case?

What will you do with the time you have left?

Of which, certainly, none of us know how much time we have left.

So, since we do not know.  And since we each have the same allotted twenty four hours in a day, should we not spend it wisely?

In some type of meaningful pursuit.

In some relevant activity.

I read recently that when people come to their latter days and they consider their regrets in life, it is rare that they have regrets of what they did in their life.

On the contrary, it is the regrets from those things that they did not do.

The person they should have married.

The career path they should have taken.

The words they had the opportunity to say…and did not.

The action they could have taken…and chose not to.

With 2018 coming to a close, I want to spend the new year in pursuit of dreams, trying to catch my breath from laughing so hard and spending what time I do have left with those who cherish what I also cherish…every single moment.