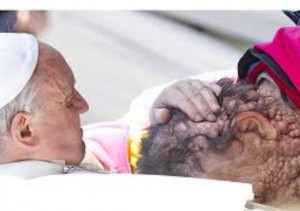 There was something different, but from the angle from which I was standing she looked perfectly normal, very much a teenager. Then she turned around…

…I could not tell what caught my attention first.

Was it her gentle and caring manner?

Or was it the very obvious facial deformities?

My mind immediately went back to the 1980’s and a movie called Mask.

In it, the character of Rocky Dennis suffered from craniodiaphyseal dysplasia, which is a rare, disfiguring scelerotic bone disorder.

It was a very moving film.

As I watched, her hands were also affected making it difficult to pick up items, yet she did so with a sense of accomplishment.

As her family left the store I wanted to catch up with her and tell her what a great job she did in bagging the groceries, but my express line was not expressing,

So I just watched her interact with her family and then walk away.

I stood there in line wondering…almost aloud.

“Why was this quiet, sweet young girl affected by such a horrible disfiguring disease?”

The I remembered something taught to me as a child.

God never created anything that He did not find any less than beautiful.

This experience brought to mind a photograph of Pope Francis and how it became one of the most distributed photos in recent years.

He taking into his arms a man who was severely affected by the same disease that inspired the movie, The Elephant Man.

May we each be given the opportunity to love those who God only sees as beautiful.

May we recognize and want to attain in our own lives the beauty which comes from within.