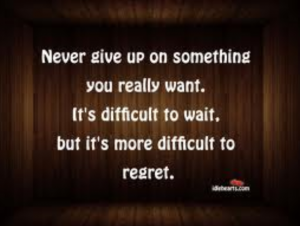 I am often self-encouraged by my own lack of ability to recognize the obvious.

In other words, the obvious that says, “This is never going to happen.  Quit trying.  You can’t do this.  Others have failed, you will also.”

Simply put, I am too stupid to give up.

We each have read accounts of historical figures or business leaders, who, not known then as visionaries, were told, and in many cases, multiple times, that what they were attempting to do would not, could not, will not, succeed.

Yet they kept trying, kept pursuing, would not let go of their idea, their vision, their calling, their purpose for being born.

One, which I will not name here, is above all others.

It rarely ever leaves my mind.

I go to sleep with it.

I wake up with it.

But until then, I have to fail.

What two things do successful people, (and that does not necessarily always equate to money), have in common?

They fail and they never give up.

We are never defeated by our opponent or the challenge in front of us.

We are defeated by our own inability to get back up and to keep fighting.

Whatever it is you have just failed at, get back up and go after it again.

One more failure is one step closer to success.