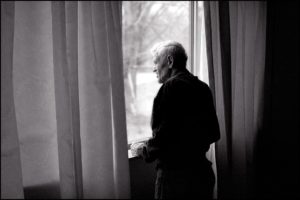 I held him as tight as I could without hurting him. His head rested in my left arm as his breathing became shallow.  And he took one last look.

When death enters a room and you can sense it is near, it creates a surreal sense of life at the same time.

There is the smallest of thresholds between the two…life and death.

He was covered by a blanket as I took him in my arms.

I knew it would be, twenty minutes, maybe sooner, when death would escort him out of the room, leaving me behind holding a frail body, tears dotting the blanket.

Death, in it’s own way, allowed me a few more minutes of memories.

His body continued to shake as I pulled him tighter, trying to warm him somehow, leaning into him, wanting for any last moments together to be sweet.

The med-assist and doctor entered the room to inject a sedative that would relax him and ease the pain as he neared the end.

I thought of the days again…the walks, all that we had done together.

The doctor injected the sedative and I felt his old, tired and weakened body began to relax.

The shaking stopped, his breathing lessened and I cradled his body and leaned over him as though holding on to each passing moment whispering, “I’m right here, I won’t let go.”

His breathing became so faint and his heartbeat so infrequent that I thought the sedative itself might have caused him to drift from this life without a sound.

And then I heard a quiet sound barely recognizable as a sound at all.

It was a snore.

The snore that an old man makes when he is in the deepest of sleep.

I stroked the hair back from his eyes and waited for another breath.

The doctor asked me if I would like to wait outside and I said, my voice beginning to break, “No ma’am.  I just want to hold him until the end.”

And then for some reason that I cannot explain he opened his eyes as if to literally take one last look around, and with what strength he had left, he nudged his nose into my neck.

It was almost a kiss.

His head rested back into the cradle of my left arm and with me holding him, the doctor acknowledging that his heart had stopped, the med-assist offering me comfort, the muscles in his weakened body tightened…and he was gone.

I could not even look up.

I just continued to stroke his head and said to my friend, “One last look, at the place that you are leaving.”

The med-assist gently placed a sheet over him and asked me to step outside for a few moments.

Death had come and taken my friend, my companion of fourteen years.

Death had come and taken him from me.

Out of my arms, death had taken him.

But not the memories.

Death cannot have those.

Those I will hold for many years. 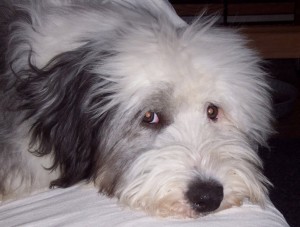