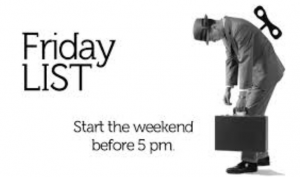 You thought only last Sunday, that this current week would be a breeze.

“What could go wrong in five days?”, you said.

That one child, in your class of twenty eight, gave you all the reasons to believe that this kid may in fact be…a devil child.

That client who was supposed to close the deal on Tuesday, was still missing on Wednesday, and when they showed up on Thursday, they reneged on the deal altogether, leaving you with a week of empty cash flow.

That red light.  The one that catches you every morning and you swear that it waits for you, and then, Bam!, it holds red for at least five minutes it seems.

That college paper, the one you have been working on for the past twenty six hours, straight.

You drag your weary body to class, only to be told that the professor has chosen today, to be a personal vacation day…for him.

But now Friday is here.

Your employer is expecting you to give a full day’s work, filled with exuberance in the workplace.

What they don’t know is that you mentally checked out at the end of the day, Thursday.

You are at work today in physical presence only.

You have lowered your landing gear and you are ready to depart the plane for the weekend.

However, as I like to say, “Today may be the best day of your life.  You never know.”

So, give that devil child in your class one more chance.

Someone did for you once.

Give that now former client a call before the end of the day, and say, “I have an idea where I believe we can put the deal back together and do great things together in the future.”

Call the local Department of Transportation on your break and ask them to address the red light.

And then send over a dozen Krispy Kreme doughnuts as a thank you.

Write the professor a note, thanking him for the preparation he puts into each class.

And tape it to his office door.

You have only a few hours left to salvage the week.

It can be one of the greatest weeks in recent memory.

And next week will then be even better.