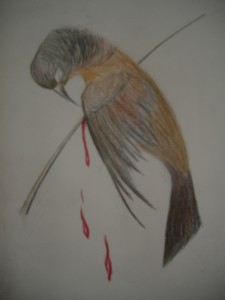 “There is a legend about a bird which sings just once in its life, more sweetly than any other creature on the face of the earth.”

“From the moment it leaves the nest it searches for a thorn tree, and does not rest until it has found one. Then, singing among the savage branches, it impales itself upon the longest, sharpest spine. And, dying, it rises above its own agony to out-carol the lark and the nightingale. One superlative song, existence the price. But the whole world stills to listen, and God in His heaven smiles. For the best is only bought at the price of great pain… or so says the legend.

The thorn bird with the thorn in it’s breast, it follows an immutable law; it is driven but it knows only to impale itself and die singing. At the very instant the thorn enters there is no awareness in it of the dying to come; it simply sings and sings until there is not the life left to utter another note. But we, when we put the thorns in our breasts, we know. We understand. And still we do it. Still we do it…”

(As told in the legend.)

I love to interact with creative types.

Musicians, writers, composers, singers, artists, all unique in their own way.

Recently I had the opportunity to introduce myself to someone I consider gifted in terms of performance and leading others in worship.

Yet when I was speaking with them, I sensed their confidence was gone, their gift to interpret the lyrics of a song had become dormant, their sensitivity toward the presence of God felt…but now out of personal sorrow.

We talked for a while and I learned they had gone through a very difficult period in their life and now they determined their future by the level of pain they were experiencing and that happiness was not to even be further considered.

I inquired if they were aware of the legend of The Thornbird and why it sings as it does, and encouraged them before they sang again to research the legend and determine if it might apply to their personal situation.

When I saw them again, they said it had stirred their heart and they admitted that they too had impaled themselves upon a thorn, and awaited the inevitable outcome.

In our own lives, we each bear pain and can feel at times that we are also slowly bleeding to death.

I ended my interaction with this singer / musician with this statement, “You are in the process of rediscovering your gift, and as you do, remember that the greatest act that Christ ever did for you personally, was on the cross…as he was slowly bleeding to death.”