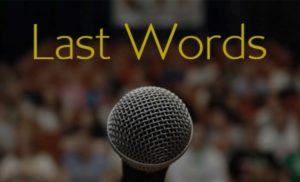 I have told friends of mine, if you are aware that I am only an hour from passing away, wherever I am, come find me and I will tell you a beautiful story.

Few in life have the opportunity as we approach the threshold of death to consider our last words.

However, what if we could?

What would we say?

Who would be at our side to say it to?

Recently I came across a video and written article on the last words of famous people.

Steve Jobs, Founder of Apple, who literally changed the world through his creative approach to technology and the future, said nothing like you would think a person of his accomplishment might say.

At age 56, in October 2011, with his family near him, this man of immense talent who’s very words altered the future, said the same phrase, three consecutive times, “Oh wow.  Oh wow.  Oh wow.”

What he saw no one knows.

Albert Einstein, who developed the Theory of Relativity, and is considered as possibly the smartest, if certainly not one of the smartest people to ever live, at age 76, in April of 1955, spoke a few words to his nurse who had come to his bedside.  Unfortunately, and certainly interesting, we will never know what were the last words of this brilliant mind who had given the world, E=MC2, for Einstein spoke his last words in German, and his nurse only spoke English.

Whatever he said, as his final statement, was not understood, and consequently was not able to be passed on.

So where does that leave any of us?

Actually, more appropriately asked, where does that leave others?

And what words will we leave behind for them to remember us by?

Will it be words describing love found?

Will it be the regret of love lost?

A story of how purpose in life was achieved?

Our love for our family?

A declaration of faith?

What will they be?

And to whom will they be said?