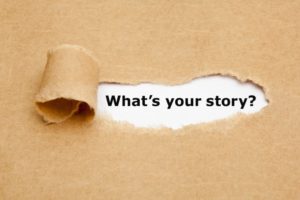 I have on many occasions walked up to someone, extended my hand, and said, “Hi, I’m John, what’s your story?”

And every time, that person will tell me, their story.

Such was the occasion when Shaquille O’Neal and Kobe Bryant came to the Los Angeles Lakers.

Both of them still young and all of the NBA and those who follow basketball were excited, not only about the potential for championships but also for the potential of sports drama.

The production company I produced for was hired to travel to multiple NBA cities and shoot green screen footage of that team’s current star players.

We arrived in Los Angeles and the following morning set up at the Laker’s practice facility.

It was one of my responsibilities, along with overseeing the shoot, to greet the talent, in this case Shaq and Kobe, and let them know how the morning would go in terms of what we were hoping to accomplish.

As Kobe Bryant was working with the production crew in front of the gym, dribbling, passing, shooting, I found a spot toward the rear of the gym and assumed the Producer’s position.

The Producer’s position is when the Producer, in this case me, stands back, crosses their arms and personifies someone calm and in charge, even though in the back of their mind they are thinking, “This is pretty cool and I can’t believe I get to do this.”

As I am watching the crew work, in my peripheral vision, I sense a very large person moving in next to me, without saying a word.  This person happened to be all 7’2″ 325 pounds of Shaquille O’Neal.

Being quite the cut-up, Shaq, again without saying a word, took up the Producer’s pose, mimicking me, looking intently toward the front of the gym.

As I stood there for a moment the words just came rolling out of my mouth.

It was as though we had rehearsed this conversation…but we had not.

While looking straight ahead, I asked, “Shaq, what’s your story?”

And without looking at me, with no hesitation, Shaquille O’Neal began to tell me his story.

Not of being a basketball phenom, nor being rich, nor being a celebrity.

He told me what it was like to be told that he was too slow and too dumb to play college basketball, and certainly would not be able to make it to the NBA.

Yet, there we were, standing in the back of a practice facility and I was hearing the story of one of the most famous sports celebrities in the world.

Every person you meet, and, even those you do not meet, has a story.

Look behind the curtain, open the door, pull back the label, ask the question, “What’s your story?”, and be amazed at the beautiful stories that are all around you.