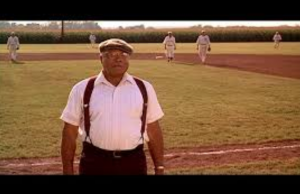 In the movie, Field of Dreams, Kevin Costner, played Ray Kinsella, a young farmer in Iowa, who believed that he was supposed to build a baseball field in the center of acres of planted corn.

He had heard a voice in the middle of a field.

A voice telling him to, “Build it and they will come.”

Because of his devotion to the voice, the farm is a few short hours away from being foreclosed upon.

Those with negative voices speaking to him.

“You’re going to lose the farm.”  “You’re broke.  In the morning when the bank opens up they will foreclose.”  “Just sign the papers.”

Yet he would not be discouraged by those other voices that were predicting his demise.

A scene from the movie, shows James Earl Jones, playing Terrance Mann, as the sole believer in the vision Ray Kinsella has set upon.

Are you listening to a voice or to voices?

The quiet voice inside of you saying, “Move forward and do what you have the gift and the ability to do.”

Or the negative voices that surround you screaming, “You are going down and you are taking us down with you.”

You must follow the voice which says, “People will come Ray.  People will most definitely come.”