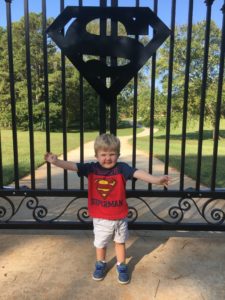 This past summer, I was having an adventure day with my two year old grandson, Beau.  As soon as I saw him, and what he had on, I knew where we were going.

Just south of Atlanta, Georgia, there is a bedroom community called McDonough, properly pronounced “MacDonna”.  Those who pronounce McDonough as “MicDunna”, well, they are obviously not from there, but possibly might be from the mid-west region of Ireland, near Limerick, which is in Clare County…but again…that is in Ireland.

So…I walked into Beau’s house and my daughter Savannah, Beau’s mother, had dressed him in shorts and a Superman t-shirt.  I knew right then the first stop on our adventure.

Safely buckled in we headed for the home of one of the more recent residents to the McDonough, Georgia, area, Shaquille O’Neal, yes, none other than Shaq, whose very large home is a stone’s throw from the high school where each of my daughters graduated.  We pulled up in front of the gate which protects Shaq from people like me.  But really, how much protection does a 7’2″ man need?

So I placed Beau in front of Shaq’s front gate, which, by the way, has a Superman logo built into the gate itself, thus being the first stop on our adventure.

I got out my iPhone and said, “Beau, pretend like you are Superman and you are flying!”

Once we had the shot we wanted, we then proceeded to our next stop on our day of adventure.

As I was driving with Beau safely buckled in his car seat, I began to have a conversation with Beau, the two year old, and said, “Do you remember the first thing I ever told you, the night you were born?”  There was silence from the back seat, so I continued and said…

…”Beau, I held you close and told you, ‘Hi Beau, I’m John, I love you, and don’t ever let anyone tell you you can’t fly.  You can Beau, you can fly.  You can do anything you believe you can do.'”

That’s what we all need in our lives, someone that says, “Don’t ever let anyone tell you you can’t…because you can…if you believe you can.”

As you step into your future, one day at a time, I hope your future will bring to you wonderful memories from the past, peace in the present and hope for the coming days, and may the days ahead be greater than anything you could even ask or imagine.