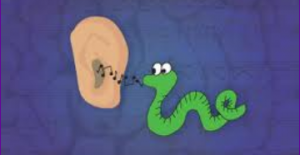 Have you ever wondered why a song gets stuck in your head and no matter what you do, you cannot get it out?

It is because you have an earworm.

This happened to me recently.

My next door neighbors, Roger and Cherie, are traveling through Louisiana and Texas over several days.

I sent Cherie a text just checking on them and where they were on their trip.

She replied they were in Galveston, Texas.

Immediately an earworm crawled in my head and the chorus of the song, “Galveston”, by country artist icon Glen Campbell got stuck and I have not been able to rid myself of it, and it continues to cycle through my brain, over and over again.

Buy why does this happen?

An earworm gets lodged in your head and causes a sort of “cognitive itch”, or “brain itch”.

When we listen to a song, it triggers a part of the brain called the auditory cortex.

“Researchers at Dartmouth University found when a song was played to participants in a study, and the song stopped playing, their auditory cortex filled in the rest.  The only way to scratch brain itch is to repeat the song over and over.  However, similar to a mosquito bite, the more you scratch, the more you itch.”  From an article written by Stephanie Watson on the website, www.howstuffworks.com.

Stephanie Watson goes on to write that, “Earworms eventually crawl out on their own, but if they do not, there are ways to rid yourself of an earworm.  One of those ways is to share the same song with a friend.  They then walk away with the earworm and you are rid of it.”

They crawl into our brain like an earworm and we cannot rid ourselves of them.

It becomes this non-ending cycle of negative thoughts, regrets, unpleasant memories and fear of consequences for the future.

What do we do with our negative mood, thoughts and attitude we are carrying around?

We transfer our negativism to someone else.

Then we are free of it, but only momentarily.

The next time negative thoughts and emotions crawl into your head, don’t share it.

Instead, take the same steps to rid yourself of a negative fixation as someone would rid themselves of an earworm.

Break out in a happy song.  (Most Disney songs will work.)

Reflect upon fond memories and hopeful thoughts for the future.

Begin looking up, not down.

Physically remove yourself from the immediate environment you are in, at least temporarily.

Do not let yourself nor those around you have your life and their lives changed by a negative earworm.