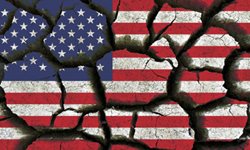 I pledge allegiance to the flag of the once United States Of America, and to the fragmented society for which it currently stands, a fractured nation, divisible, no longer under God, with liberty and justice for some, but no longer for all.

It just doesn’t sound quite as inspiring does it?

The United States of America has been, is and will remain one of the strongest and most open nations history has known.

In spite of current leadership who continues to divide this nation daily.

In spite of current leadership who led the evangelicals straight over the cliff of rationality.

In spite of a torrent  of hate filled speech.

In spite of a love of self as opposed to a love of others.

Don’t give in to fear, anger, divisive strategies and hopelessness.

Don’t be drawn into leadership that not only destroys with their words, but with seemingly every act of their office.

Be courageous and filled with strength, hope and continue to have an optimistic outlook for the future.

These two things combined together are the hope for the future of this nation.

“When my people will humble themselves…”

“Where two or three are united together…”

“A house divided against itself can not stand…”

How could the “very elect” be so so deceived and remain so divisive?

When the good news of the Gospel is meant to bring unity.