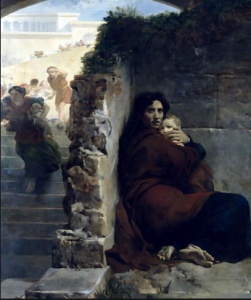 The rush and the crush.  It can take your mind away from Christmas at times, if only for a moment.

Eventually my mind will return to the true meaning of Christmas.

The announcement and birth of The Messiah.

If you go to verse ten of the second chapter of Luke, it says, “And the angel of the Lord said, ‘Do not be afraid; for behold, I bring you good news of a great joy which shall be for all the people.’

As I read this again and again the following words, “Good news, great joy, for all the people.”

This birth, this Child, was to bring with it all these wonderful events.

If you take this scripture and separate it from any other it plainly says that all the people on the earth will receive good news and great joy because of the birth of this child, the Messiah.

That all sounds great doesn’t it?  Who would not want that to be a part of that story?

Now go the other account of the birth of Christ in the second chapter of Mark and go to verse 16.

By the way, a little background.

Herod, was an evil king who was looking for this Child, the Messiah.  If he could find the Child he was going to have him killed to lessen the threat against his own reign.

He was tricked by the Magi who had found the Child but did not return to tell Herod where he could find him.

Verse 16 says, “Then when Herod saw that he had been tricked by the Magi, he became very enraged, and sent and slew (slaughtered) all the male children who were in Bethlehem and in all it’s districts, from two years old and under.”

It was called the Massacre of the Innocents.

Let that sink in.  A whole generation of males were slaughtered because the king could not find one child he wanted to kill.  Remember, the previous verse said, good news, great joy, for everyone.

If you have a young son take him in your arms for just a moment and try to imagine him being ripped away from you and killed in front of you and his now bleeding and limp body being held against you and you scream at the top of your lungs, “Who is this child that caused my son to die?!”

Where was the good news for these families?  These parents whose door of their home had been kicked in and their young infant son murdered in front of them?

The mother in the street whose child was ripped from her arms to have him trampled by the hooves of the soldier’s horses and then impaled by a spear or sword?

Where was the good news for these people?

I wonder, if somewhere as Jesus grew older that one of the parents of the young boys killed would have ever crossed his path, and would have looked at Jesus and thought, “So that this man might live we had our son taken from us and killed?”

I wonder if one of the fathers ever thought, “What type of loving father would find good news in having his son killed so that someone else might live?”

Where is the good news in all of this?

Even as I am writing I stop to consider this and can not comprehend the loss to these parents nor the gain to “all the people.”

I am most certain however, that the good news is actually found in the fact that the son who was spared at birth is the same son who was to lose his life as a young man of thirty three years old, roughly the same age that the young murdered sons would have been.

Yet again, good news is accompanied by tragedy, by loss, by suffering, by pain, by sadness and by death.

With my very limited capacity to understand, I must rest on the fact that God is big enough and compassionate enough to lovingly take care of those innocent young children who were killed and their parents who were left.

That God is such a loving God that only He can fully understand how such loss can bring about Hope.

“The Lord gave and the Lord has taken away; blessed be the name of the Lord.”  Job 1:21